It’s no secret that the Portland Region is a cycling-friendly city with some of the most well-known craft brewers in the country. But did you know Tualatin Valley also is a haven for cyclists? If bikes and brews are what draw you to Portland, explore Oregon’s Tualatin Valley for a biking and beer weekend. In Tualatin Valley, there’s a plethora of not only breweries, but also of excellent bikeways. 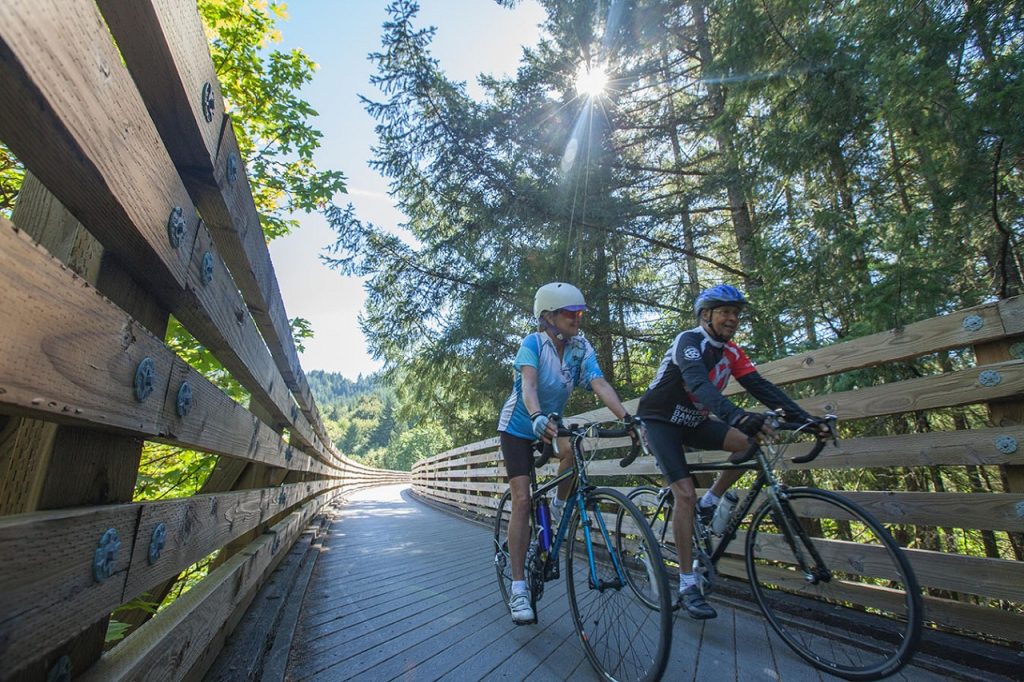 Take a Leisurely Ride in the City of Tualatin

After the ride, head over to Stickmen Brewing Company Tualatin Beer Hall for a pint and wood-fired pizzas made on-site. Stickmen brews a variety of beers including sours and experimental brews. Or head over to Ancestry Brewing, also in the city of Tualatin, and sample their brews, which they craft in their “Three Pillars” of beer styles: American, English and Belgian.

Experienced cyclists can embark on an invigorating ride along the Hagg Lake Loop at Scoggins Valley Park. This 10.4-mile ride loops around Henry Hagg Lake and provides a scenic, rural ride with minor (<500-feet) elevation changes.

After the ride, head to downtown Forest Grove to enjoy a meal and a beer at Ridgewalker Brewing. The menu is chock-full of hearty entrees, and it also features 34 taps of wine, beer and cider from around the region, including several beers from Ridgewalker’s on-site brewery.

Fun on the Fanno Creek Trail

Just off the trail, stop at Tigard’s Main Street and visit Cooper Mountain Ale Works (previously Max’s Fanno Creek Brew Pub). They brew a wide range of craft brews at their on-site brewery, which pair well with their menu of burgers, sandwiches, pizza and more.

A biking and beer weekend near Portland is one way to turn your Portland adventure into an Oregon adventure.

For a place known for its rain, Oregon sure has a lot of sunflowers. During summer months, Tualatin Valley’s sunflower season is a yellowy explosion of happiness.

Our art scene is one of the region’s best-kept secrets and Tualatin Valley makes art fun and accessible to all with these art-centric events and walks.

Several events are planned to help you celebrate the 4th of July in Tualatin Valley this year. Here is the scoop on where to go and what to see.